What’s that floating by the cash register of many Japanese, Taiwanese, and Korean convenience stores?   It’s called oden (おでん), something you will generally see once the colder months kick in.

The big question: What is oden?  It’s a type of hot pot in which fish plays an important role, both in the stock – also known as dashi, made of kelp and katsuobushi – and as a bobbing ingredient.  Eggs, a starch called konjac, tofu, and various pieces of vegetables and meat commonly round out the oden basin.  Another ingredient is called shirataki (白滝) is sometimes part of the oden pot; it is made of the root of the elephant yam, also known as konjac.  This root contains a fiber called glucomannan which makes you feel full for a longer period of time.

You can even find your favorite oden in a vending machine.  Collect all 1000.

Now, we’re going to focus on one member of the oden clan: chikuwa.

Unusually, I noticed on a Japanese television channel a man playing a chikuwa as a flute. 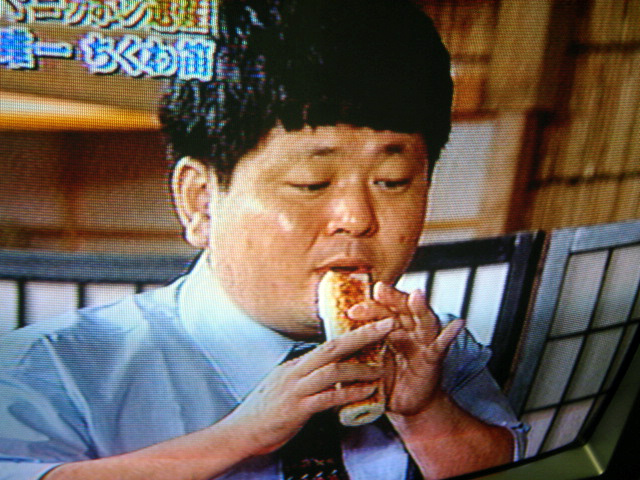 Coincidentally, a few years later, while on a trip to Okayama I happened to pass by this statue of what else, Chikuwa Flute Man.